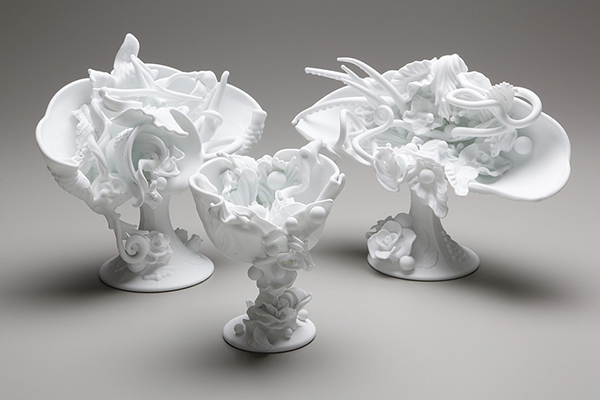 As well as being a natural, durable and highly recyclable material, little can compete with the magic that glass can offer visually. Glass-blowing as an art form dates back as far as 1st-century BC during the establishment Roman Empire. See how these contemporary artists have continued to exploit the properties of glass, to create incredible sculpture. Pictured above ‘Reconstructions in Colony Harvest’ (2012), flame-worked and hot sculpted American pressed glass by Amber Cowan. 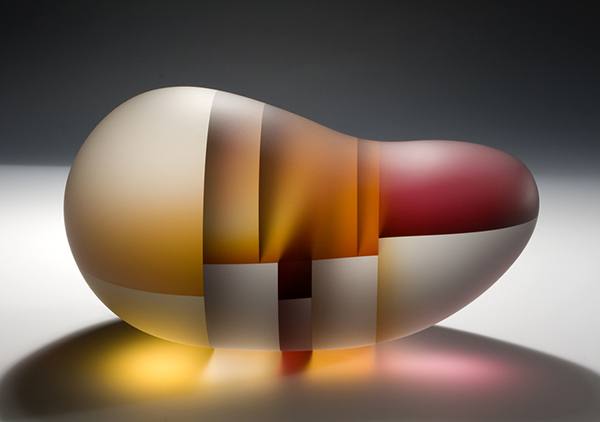 Jiyong Lee is an Illinois-based artist and educator who uses a technique of glass making called cold-working, as opposed to the glass-blowing and kiln working methods. The smooth translucent shapes are part of the Segmentation series which is inspired by the artist’s interest in cell division. The process starts with a piece of solid glass which is transformed through cutting, lamination and carving. The finished objects are so perfectly streamlined they almost look computer generated. 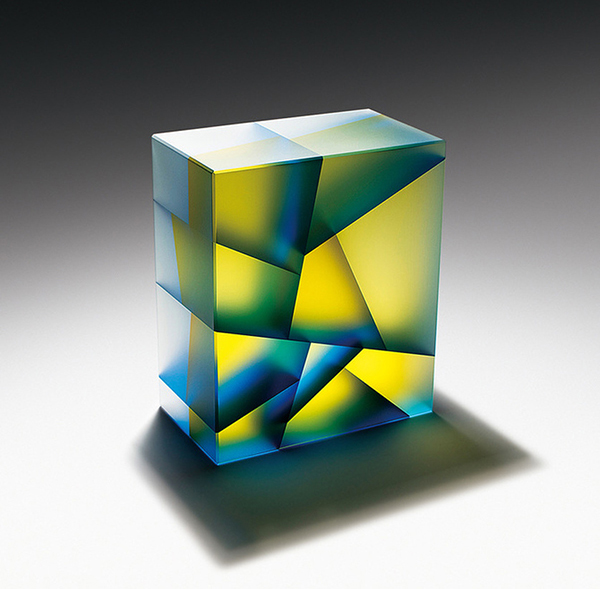 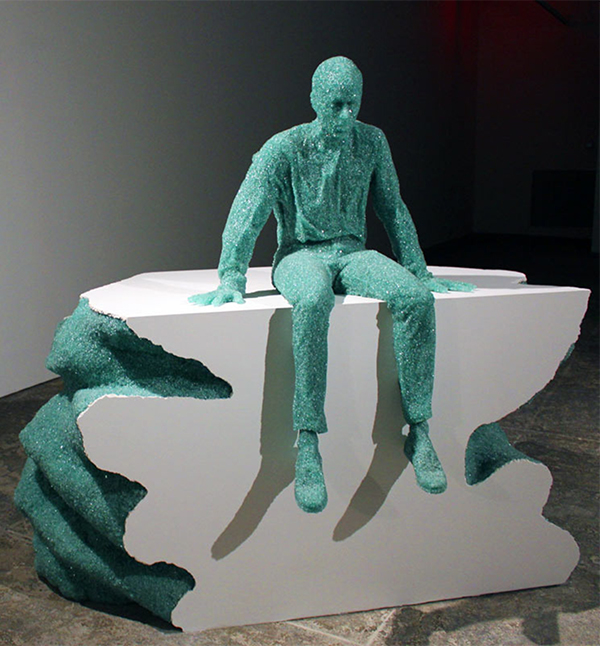 Daniel Arsham is a multidisciplinary artist with projects ranging from architectural installation to sculpture made from volcanic ash. He created a series of figurative pieces made from compacted shattered glass, including a life-size casting of the artist Pharrell. Inspiration for the works came from the glass shards found in his home after hurricane Andrew in 1992. 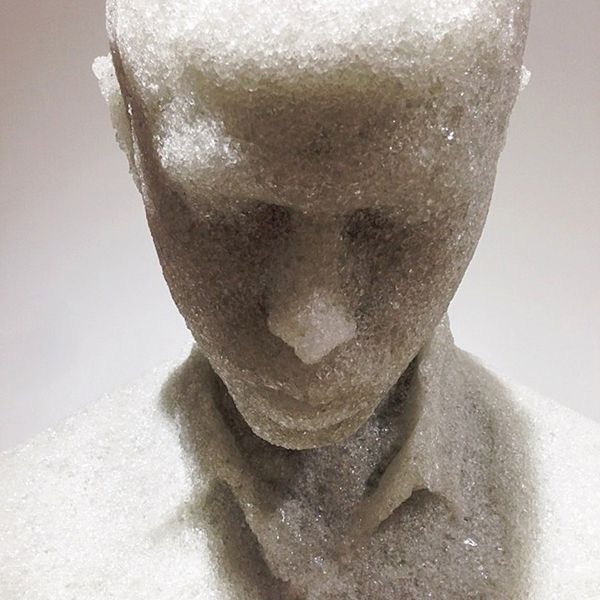 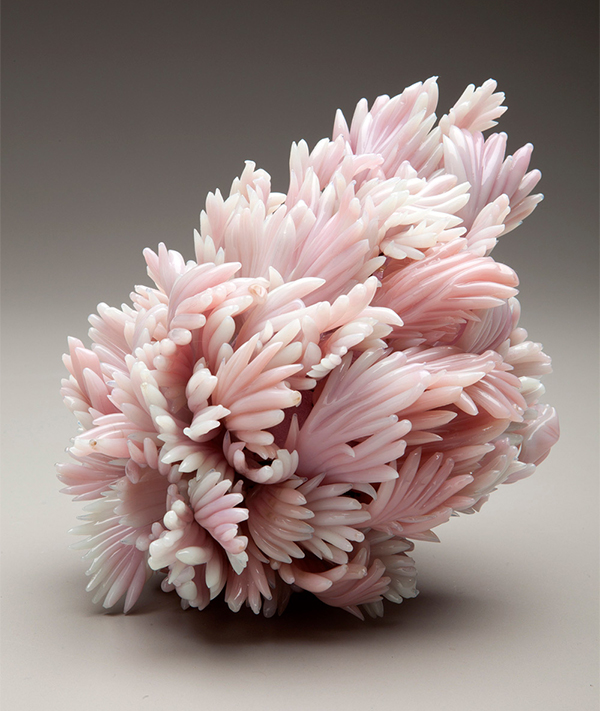 American sculptor Amber Cowan works with a process of flame-working, blowing and hot-sculpting second-life glass, primarily American pressed glass from the 1940s to the 1980s. Some of the glass is sought from flea markets and thrift stores other glass pieces are post production factory runs. Pictured above ‘Peach Blow Away’ (2012).

Her intricate sculptures crafted from unwanted glass result in pieces that look like beautiful otherworldly organisms. Below is ‘Decanter and Goblets in AVON Cape Cod’ (2012), flame-worked and hot-sculpted American pressed glass. 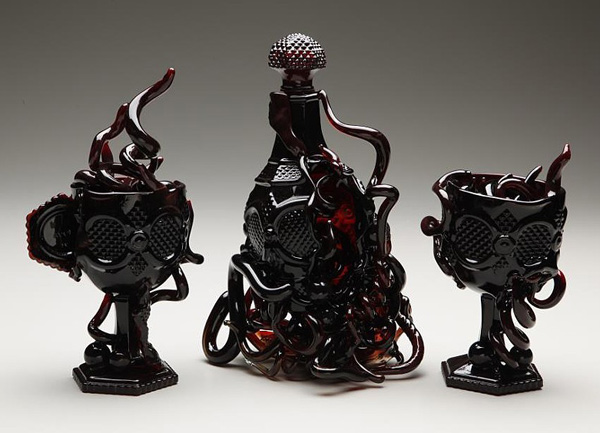 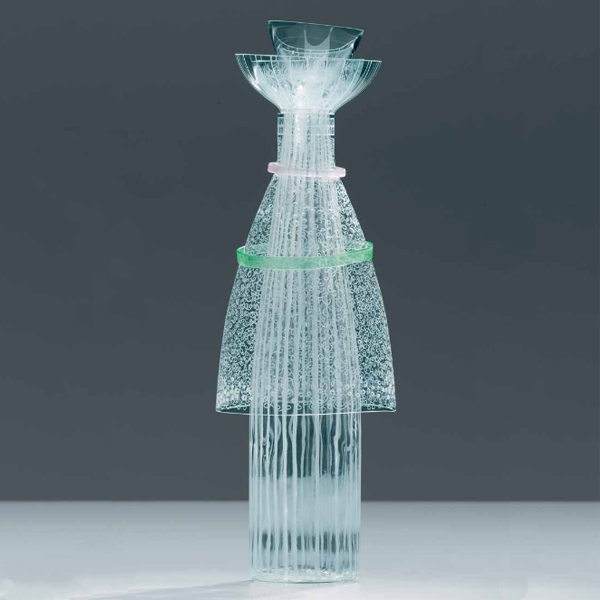 Figurine Empties are beautiful sculptures made from used empty bottles by German artist Sabine Mescher-Leitner. Fascinated by the bottle’s standardised shape which has been around for 3500 years, she searches for its individuality, questioning the dual meaning in the German word for bottle, ‘flasche’ which is a word also used for a person lacking in courage or character. 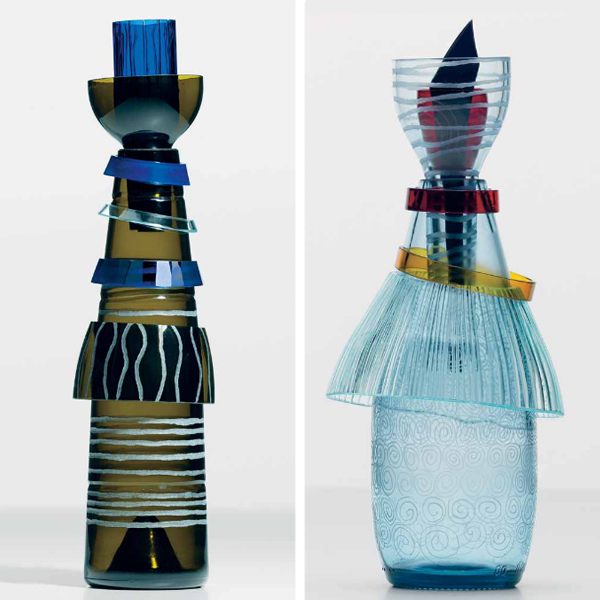 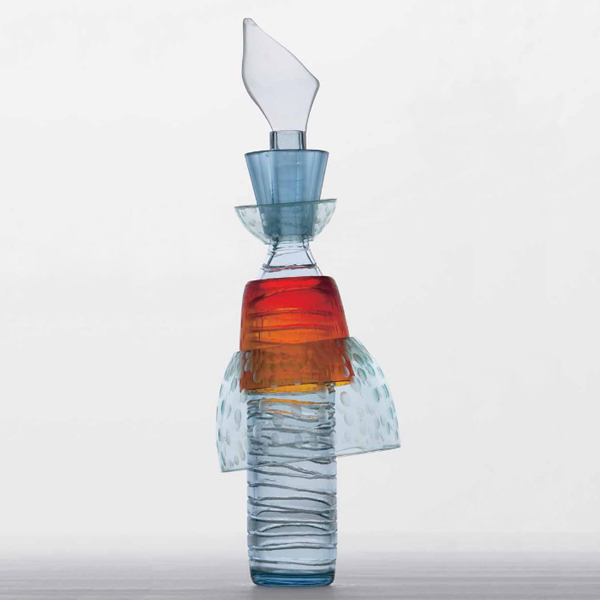 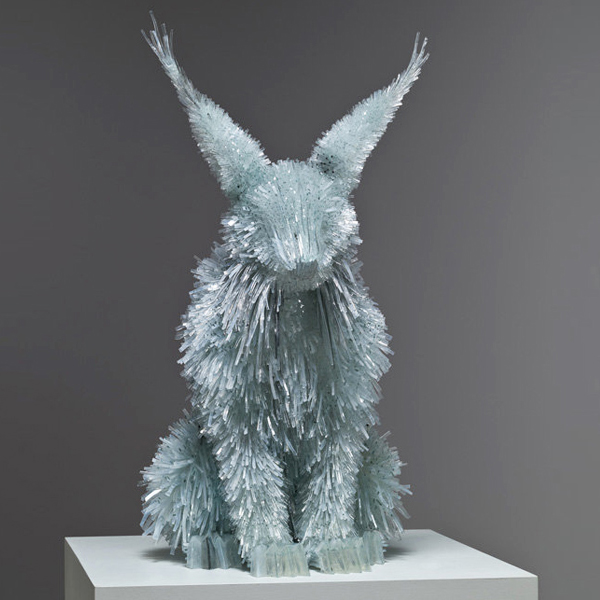 These beautiful animal sculptures are made of shards of glass by Polish artist Marta Klonowska. Some may look like they could be straight out of a sci-fi film but are in fact reconstructions of animals depicted in famous baroque and romantic paintings. 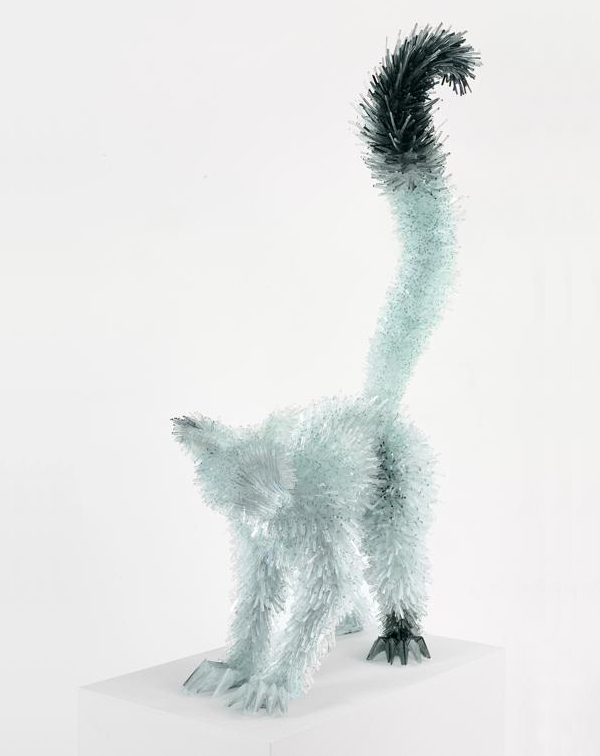 She makes the sculptures by using a metal structure that is carefully covered with glass. Despite being constructed from a cold, brittle and fragile material, the sculptures brilliantly capture the characteristics of living, breathing creatures. Above ‘Lemur’ (2011) 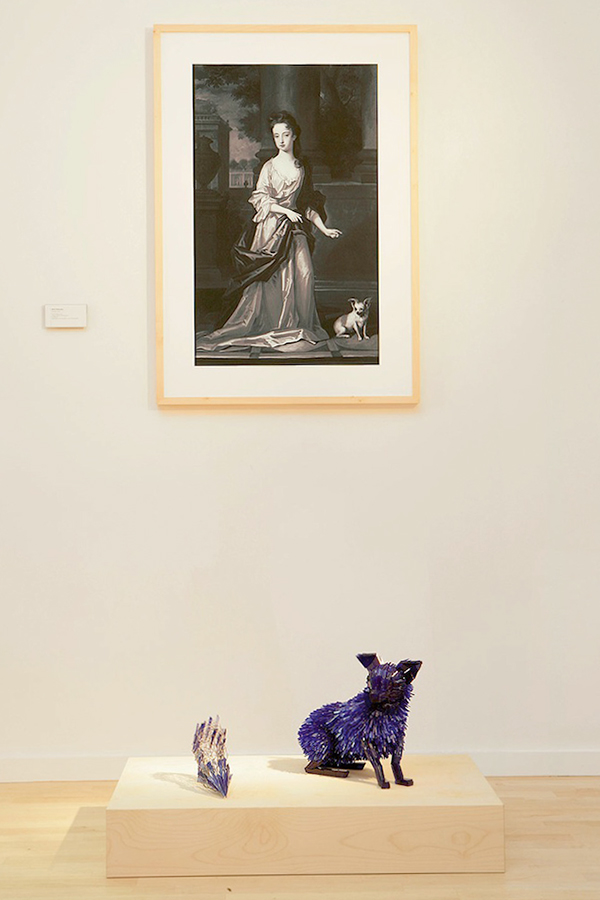 Dog sculpture in glass after ‘Portrait of a Young Girl with a dog’
c.1710, Charles Dagar 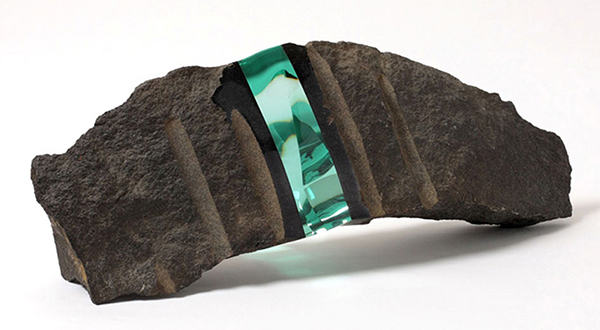 Tokyo born Ramon Todo created a collection called Stones Series whereby he transforms found stones with the injection of glass layers. Living between Japan and Germany, the stones were collected from historic sites around Europe, including fragments from the Berlin wall, as well as the Japanese island of Hokkaido. The artist also created Book Series where layers of glass are applied to found books. 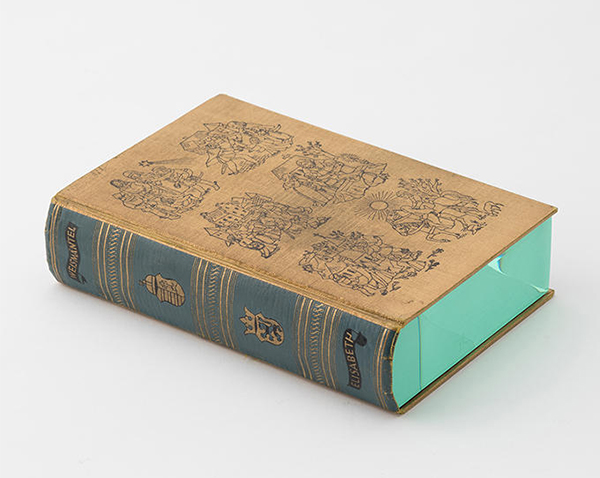 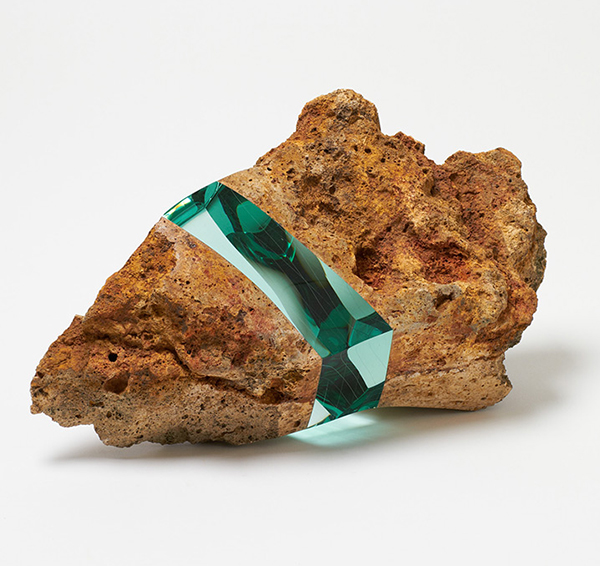 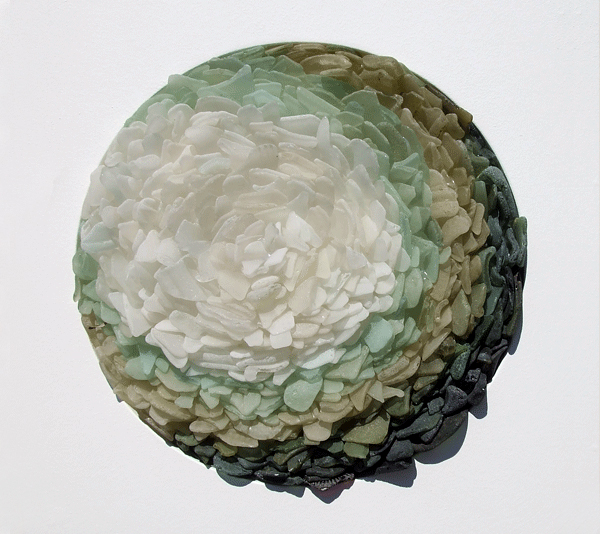 Sea glass is the name given to the frosted glass that gets tumbled against rocks and sand to create smooth pebble shaped jewels. The glass can come from industry, sea defences, shipwrecks, cargo spills as well as general littering. These sculptures by Jonathan Fuller are made from sea glass collected from the Cornish coastline. The sculptures are comprised of simple shapes with subtle colour graduations that result in forms reminiscent of the sea. 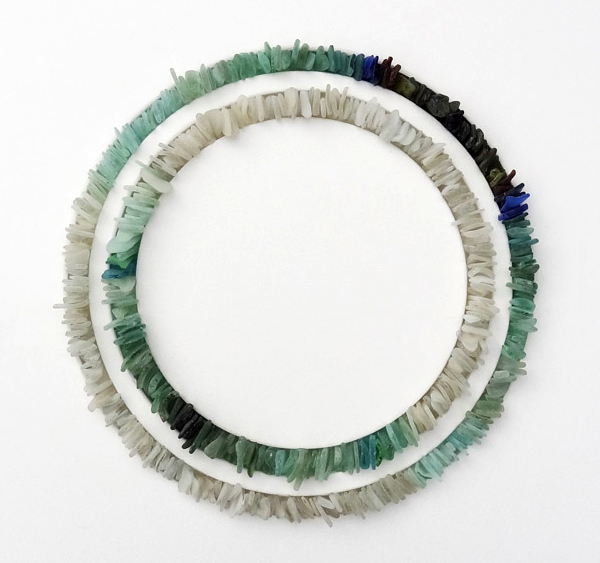 Lighting made from broken glass by Lovers Lights

Tiny sculptures made from pencil lead