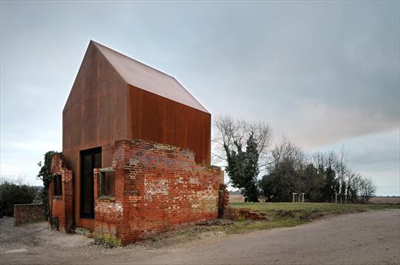 Haworth Tompkins‘ ‘Dovecote Studio’ is a weathered steel dwelling built inside the existing structure of a Victorian dovecote in a state of ruin.  Situated on the Suffolk coast, it is a has a glazed corner window overlooking long views of the marshes towards the sea. It forms part of the campus for Aldeburgh Music and is used by artists in residence or musicians for rehearsal and performance space as well as temporary exhibition space.  Dovecote Studio is one of many projects being showcased at the ‘Re-cycle’ exhibition at Maxxi Architettura in Rome, Italy.  The exhibition features a mix of projects from around the world that recycle architecture in unique ways.  Re-cycle runs until May 20th 2012.  Image via Haworth Tompkins

Lighting made from reblown glass bottles by Studio Swine

Jewellery made from cherry pips by Studio Tord Boontje