Everything Must Go with Lucy Siegle 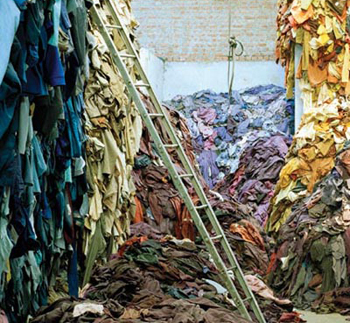 There was some great discussion regarding the future of ethical fashion at The Bargehouse yesterday.  Chaired by journalist, broadcaster and author of To Die For Lucy Siegle, ‘Talking Rubbish’ formed part of the Everything Must Go exhibition at London’s Oxo Tower Wharf this weekend.

The exhibition highlighted the processes involved in reusing and recycling worn clothing across the world, questioning our ability to control, contain and curtail waste.  It also marked the culmination of the Waste of The World research project, funded by the ESRC which investigated global flows of waste, including local waste management, food waste, the second-hand clothing trade, steel and nuclear industries and ship-breaking.

Highlights of the talk included a presentation from Antiform‘s Lizzie Harrison who explained how she runs her fantastic upcycled clothing label in Leeds by making the most of local resources in the community.  Worn Again‘s Cyndi Rhoades revealed how large corporations such as Eurostar and McDonalds are beginning to get involved in upcycling uniforms (including the Train Manager’s bag made from decommissioned staff uniforms – now being used on Eurostar trains).  She also raised discussions around looking towards closed loop textiles solutions for the future – designing waste out of the system altogether.

The exhibition was curated by Lucy Norris and Clare Patey.  Image via Coin Street

Upcycled fashion at the EcoChic Award 2014/15