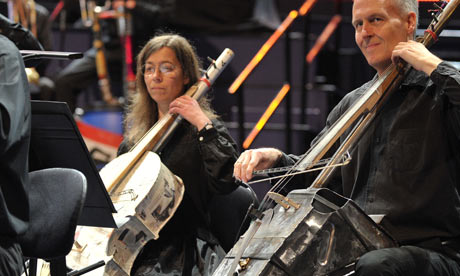 Upcyclists of scrapyard treasure would have been particularly interested in a programme aired on BBC Four last weekend ‘ Scrapheap Orchestra.’  This documented the story of the BBC Concert Orchestra who were challenged to play Tchaikovsky’s 1812 overture at the BBC Proms using instruments made entirely from reclaimed scrap material.

Instrument makers were given the task of salvaging bits of plumbing, car parts, kitchen appliances and anything they could to make a 44 piece orchestra – in just 11 weeks.  Instruments included a double bass made from a zinc bathtub,  a cello made from a Landrover fuel tank and a trombone made from cutlery, a lampshade and a trowel.

Despite a few hitches (the percussion beaters with teddy bear heads on had to be modified for fear of scaring small children) it all came together in the end, with the final performance receiving a standing ovation – a magnificent feat! The programme is currently available on BBC iPlayer.  Image via The Guardian

Sculpture made from wire hangers by David Mach

Stars made from upcycled soda cans

Jewellery made from upcycled vintage stamps