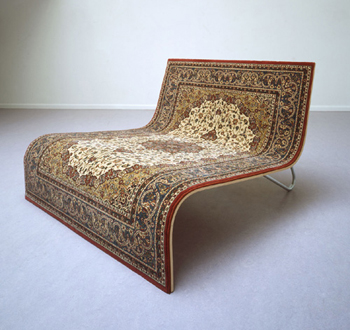 The East Meets West sofa by Dutch artist Tonio de Roover is a sculptural piece of furniture with a simple concept and modern appeal.  It takes inspiration from One Thousand and One Nights, a collection of Middle Eastern and South Asian folk tales, known in English as ‘Arabian Nights.’ A thoughtful piece not only because of the play on domestic customs in different cultures – a flying carpet that appears to rise off the surface of the earth is according to the artist, representative of the meeting of Eastern and Western minds.  Image via Recyclart.

Reclaimed on the Red Carpet